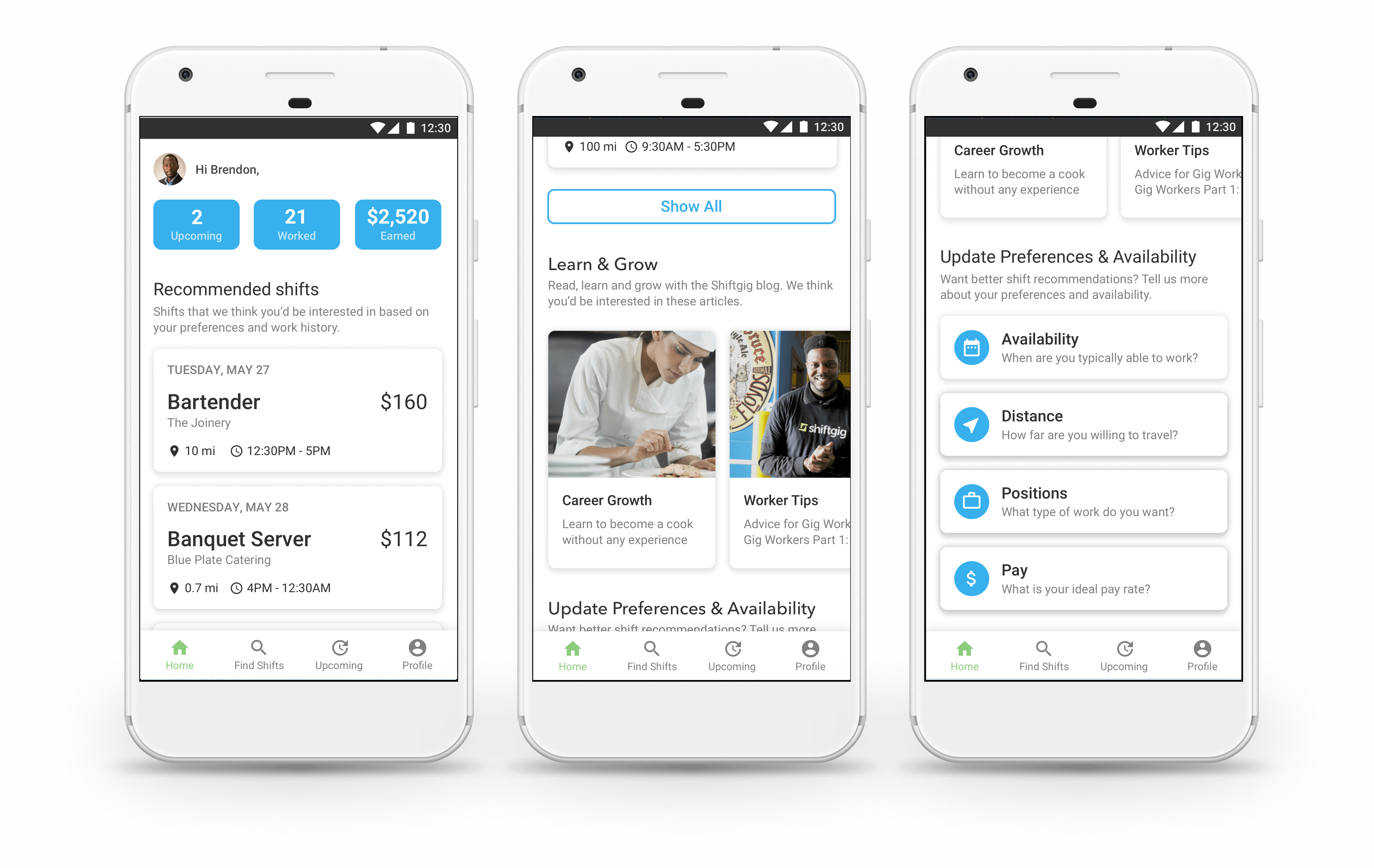 Shiftgig needed to maintain a healthy marketplace balance where workers are active and posted shifts are worked. At the start of this project, our worker users were primarily relying on notifications to learn when new jobs were added to the platform.

These alerts often didn’t match the worker’s job preferences or were no longer actionable. The shifts had already been claimed. To make matters worse, some workers were receiving more than 100 notifications per week from Shiftgig. Important, relevant alerts got lost in the noise, which negatively impacted claim and shift success rates.

The goal of this project was to reduce notification noise and help workers focus on the most important, relevant, and timely information so they could claim and successfully work more shifts.

My first step towards understanding the current user experience was to review existing observation data from past research. We had recently finished putting all of our past qualitative research observations into an Airtable database. Filtering by a few keywords returned multiple user quotes relevant to this project.

I also conducted three worker user interviews specifically for this project to add depth and clarity to our existing data. 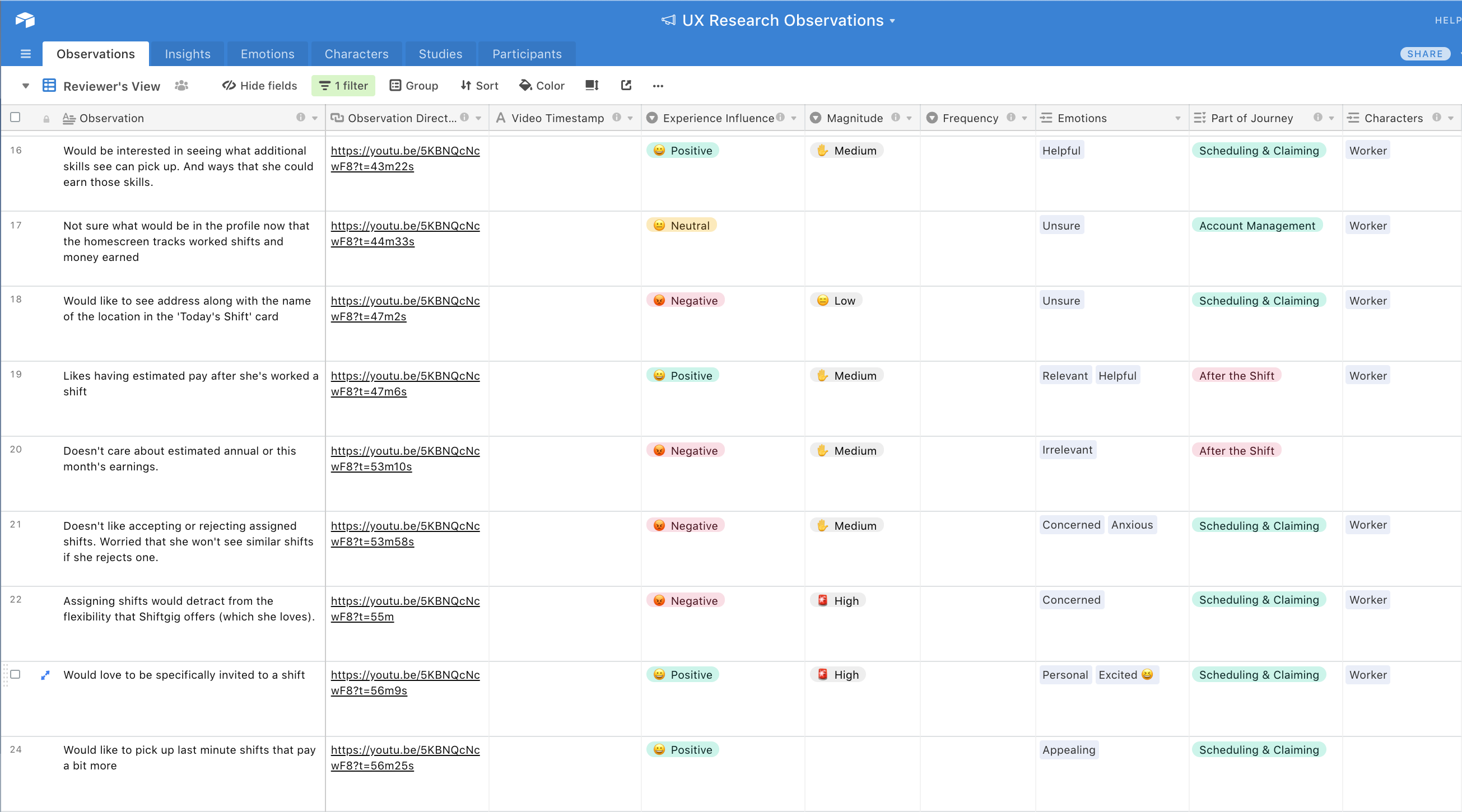 Working with my squad's project manager, we created and sent out a survey to our workers. We wanted to get a better understanding about how our workers felt about the current state of notifications, how they interacted with those notifications, and their work preferences.

In addition to reviewing existing qualitative research in Airtable, I also consulted a comprehensive competitor experience analysis put together by myself and our Director of Design, Joe Steinkamp. How were other products in our space communicating with their workers?

Once I had reviewed and compiled relevant competitor experiences, I took a broader approach and looked for inspiration from a variety of products that were solving similar problems. 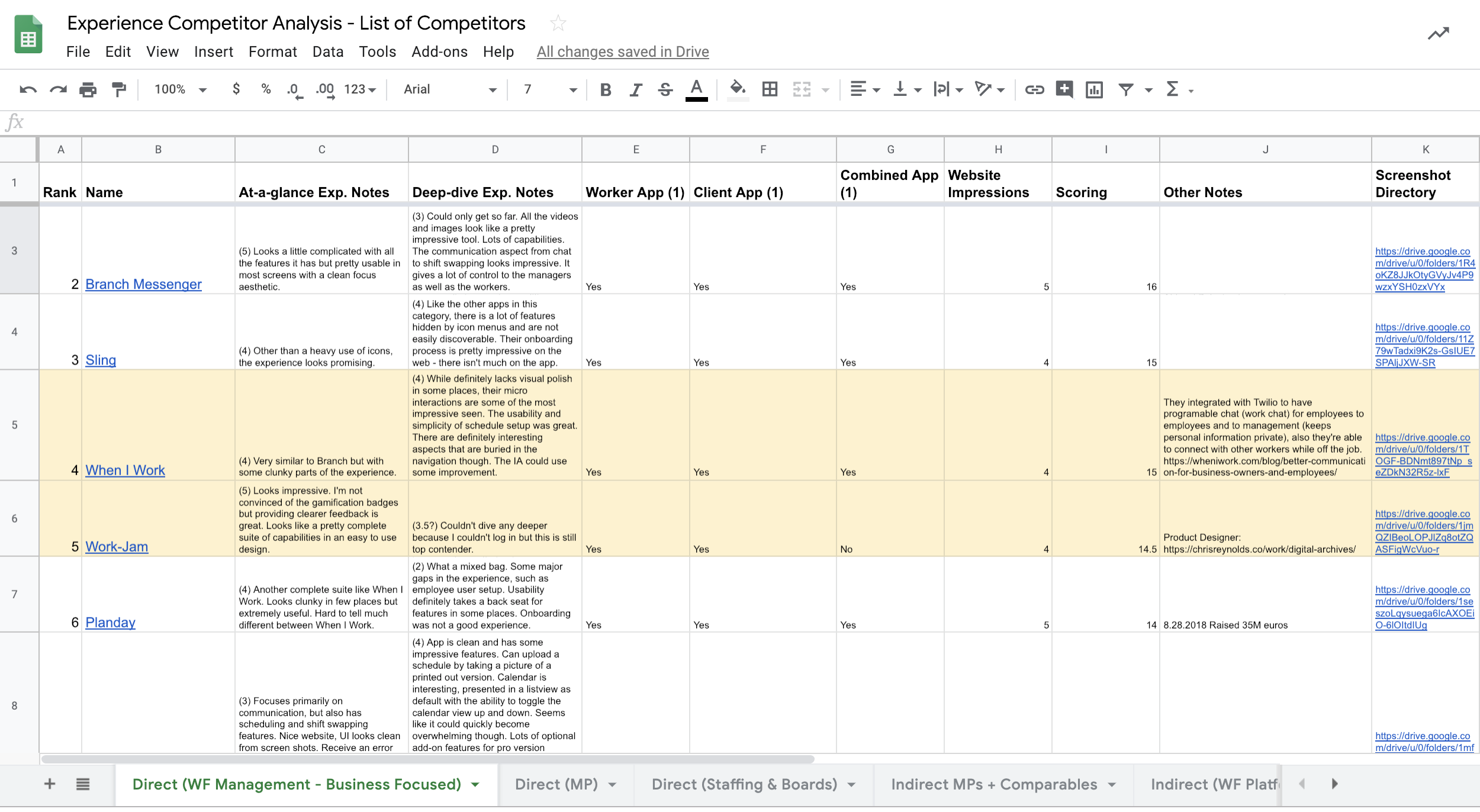 Working with the design team, we started identifying common themes and insights from all the data collected during the understand phase. Some insights started to emerge:

High quantity, low quality notifications. Workers were getting lots of new shift notifications but they often didn't match preferences or had already been claimed.

Race to claim. Workers felt "always tethered" to their phones. They had to act quickly to claim desirable shifts. Anxious about missing out on shifts.

Poor discovery experience. It was often hard to know which shifts on the calendar were new. Users had to "hunt and peck" on multiple dates and remember which shifts they'd seen before.

Shifts not matching preferences. Worker's number one criteria for working a shift was distance. They were seeing lots of shifts that were too far away.

The mom effect. Workers were getting multiple notifications with the same content through email, push, and SMS, resulting in a feeling of being nagged. 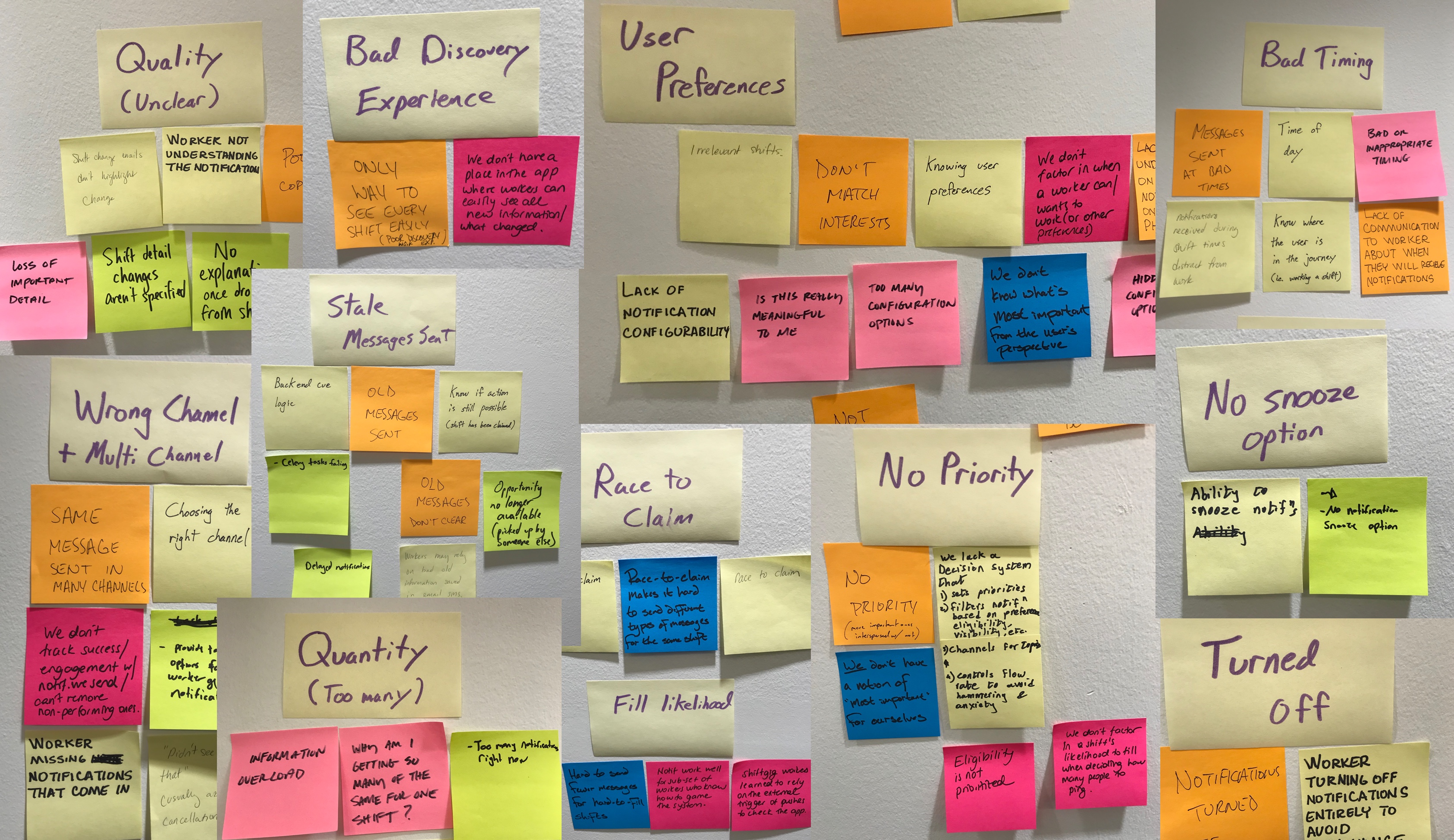 Affinity diagramming for themes and insights

I worked with team members from different departments to flesh out our worker journey to put insights into context. What were workers needs and what were they thinking and feeling at various moments throughout their experience with Shiftgig? 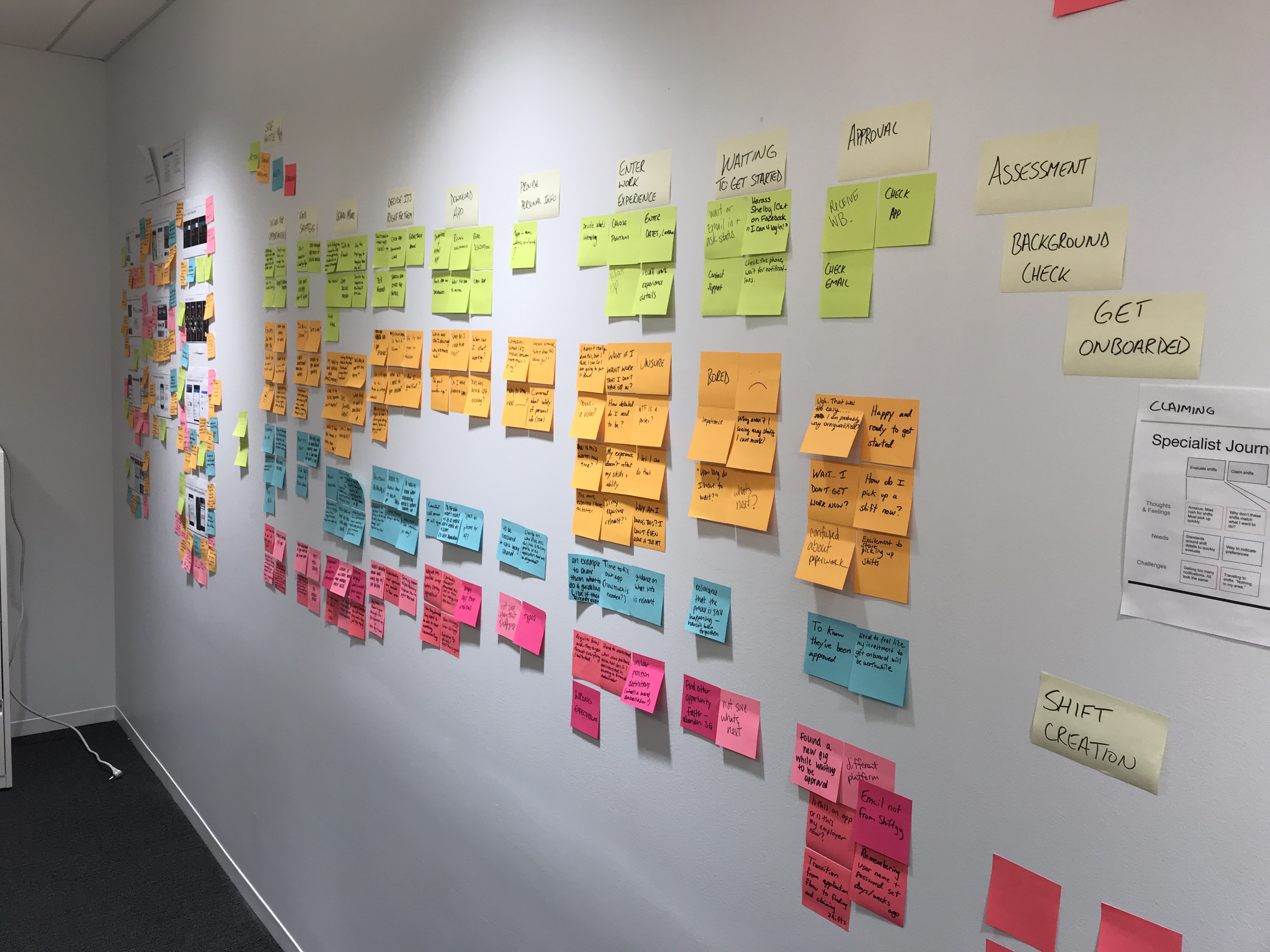 Jobs to be done

I created jobs to be done stories for different phases of the worker journey. These are helpful to use during the exploration phase to ensure our proposed solutions will improve the user's ability to accomplish their high level goals.

Example of a job to be done for a worker in the Finding Shifts phase of their journey:

When I'm trying to claim shifts, I want to be able to quickly see shifts that match my availability and preferences, so I can get shifts on my schedule and start earning money.

I started the exploration phase by sketching out many possible ideas, before honing in on five potential concepts. I then sketched out storyboards for those concepts to flesh out how the concepts would work in a flow. 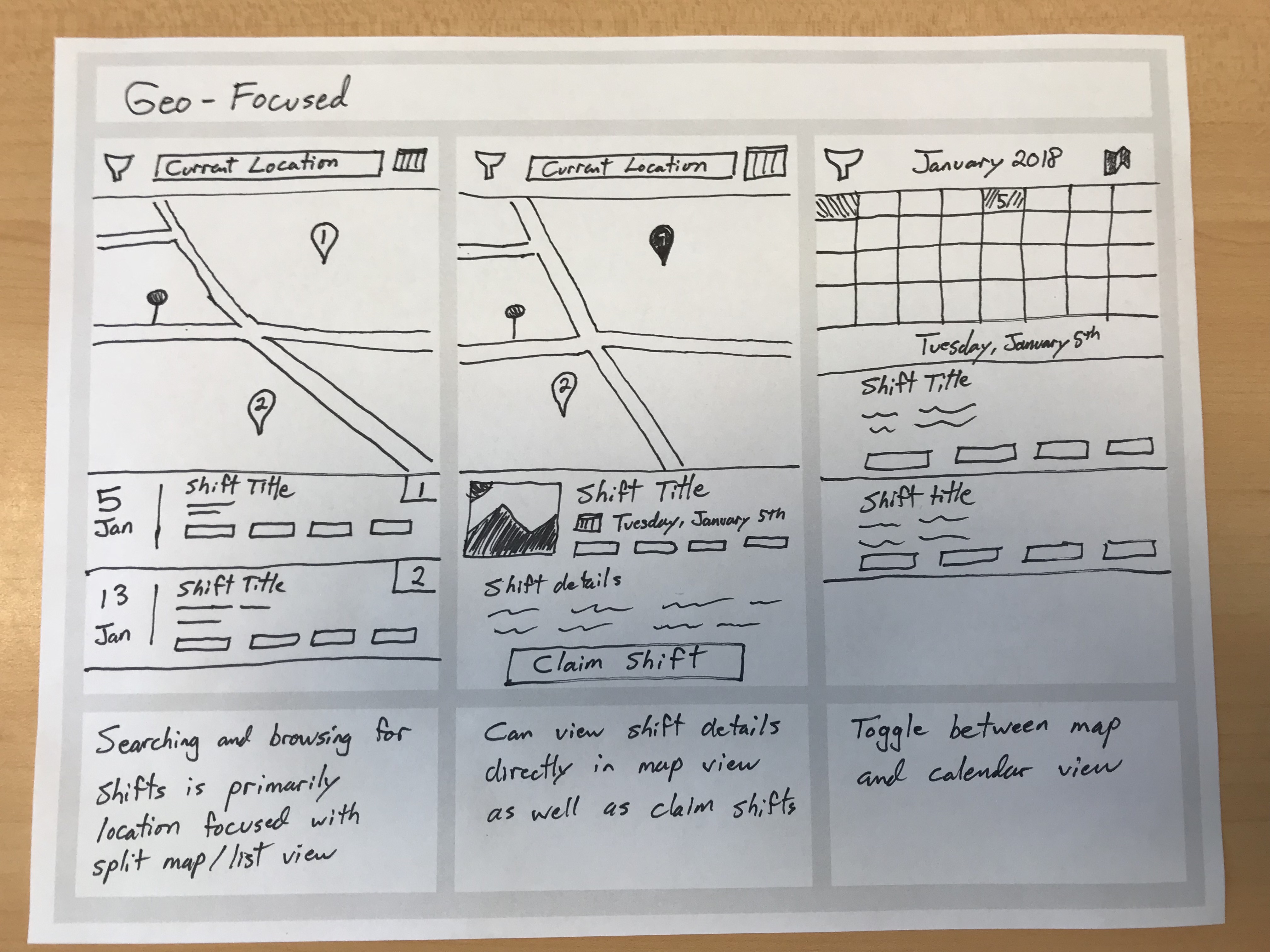 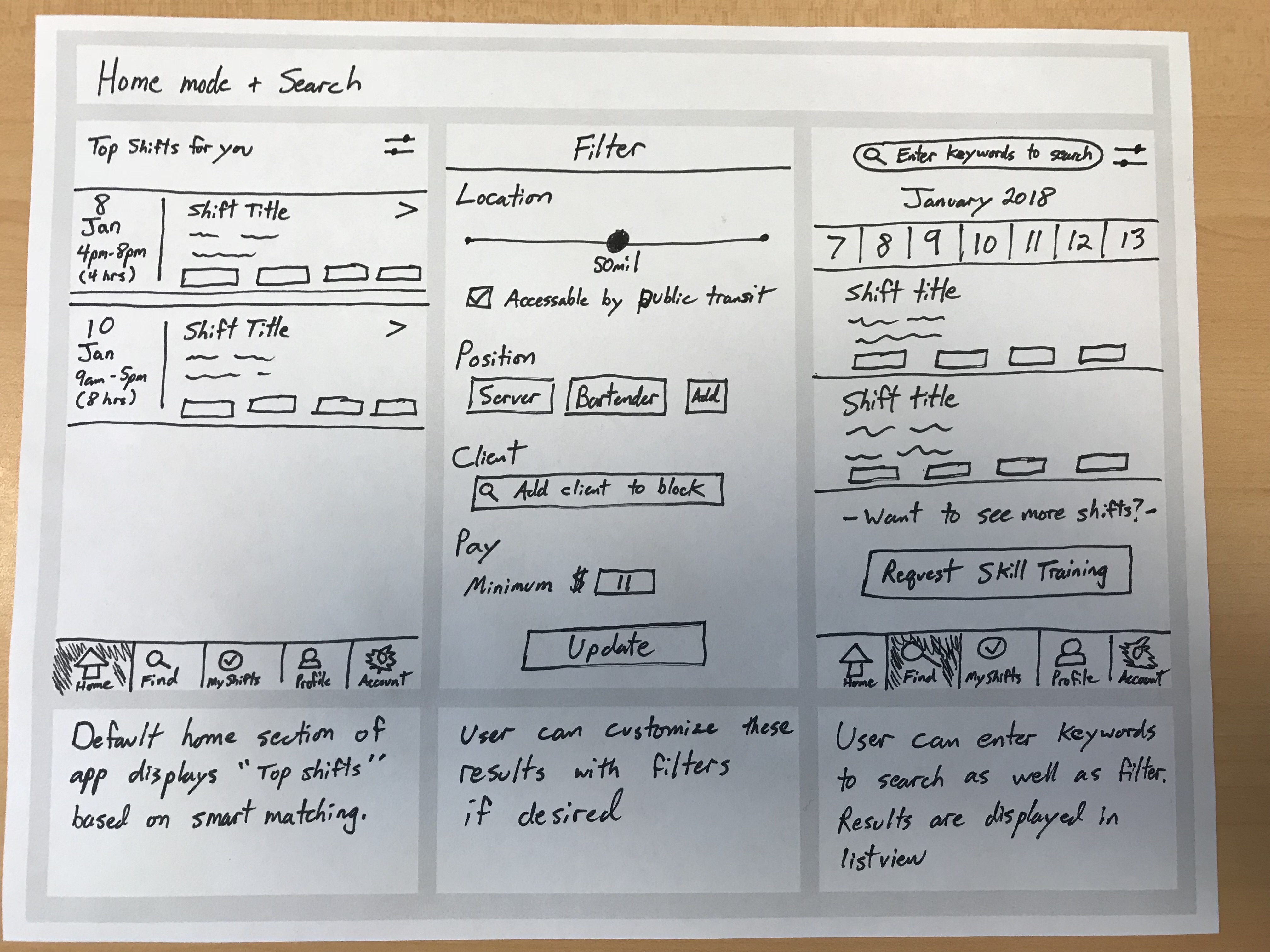 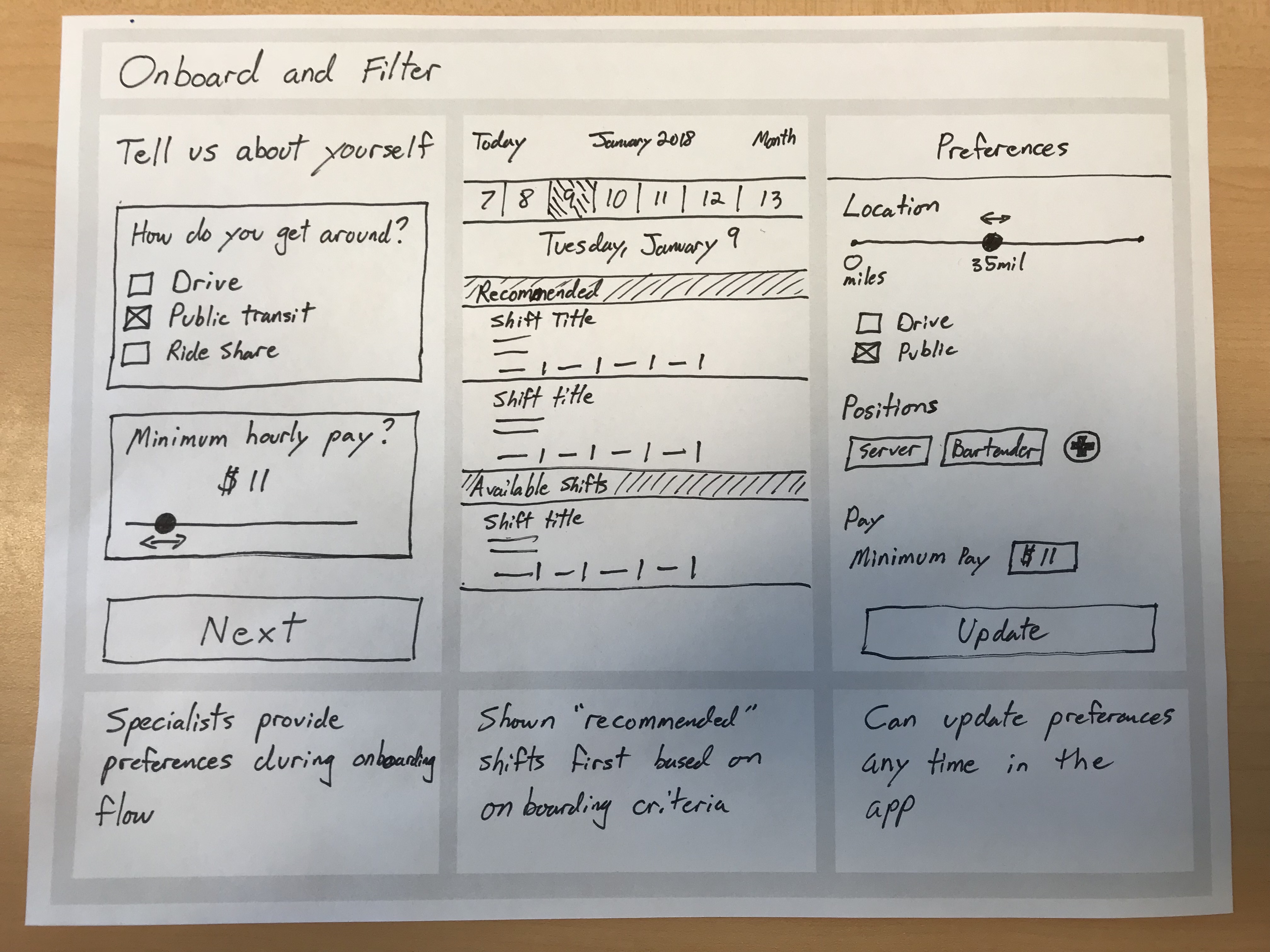 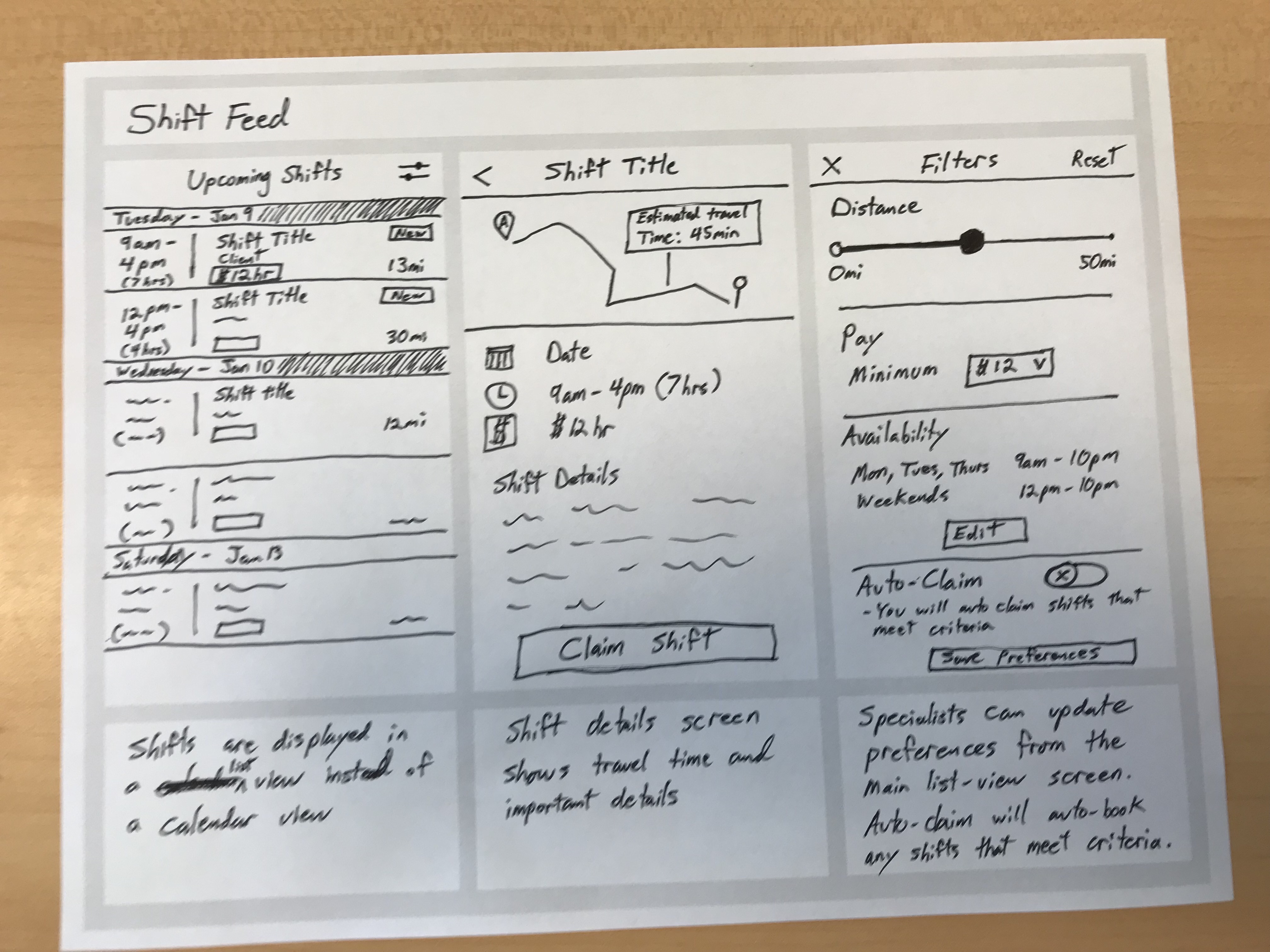 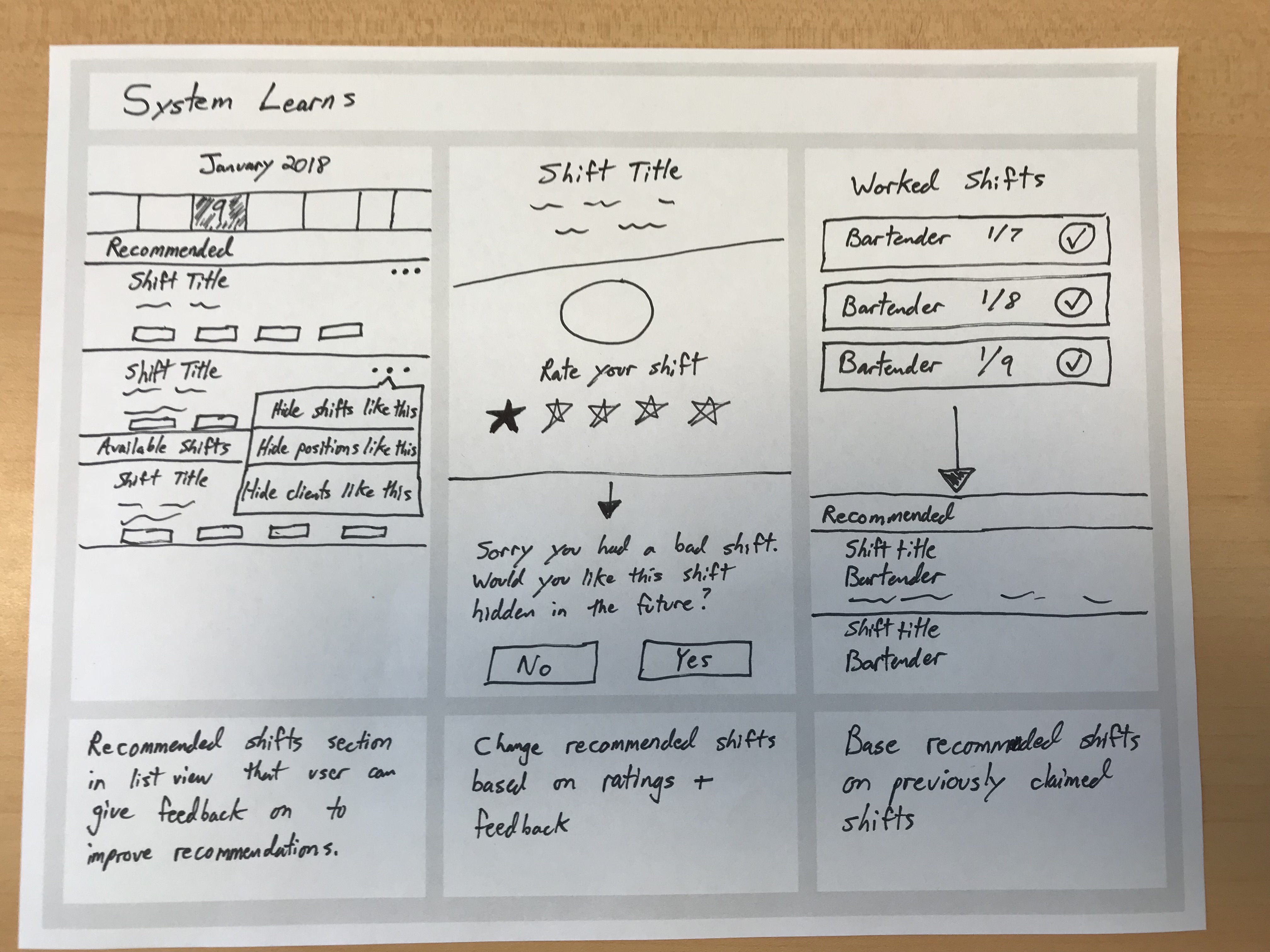 I facilitated a divergent design workshop that brought together my cross-disciplinary squad to present research insights, explore as many ideas as possible and align on a couple concepts to prototype test with users. 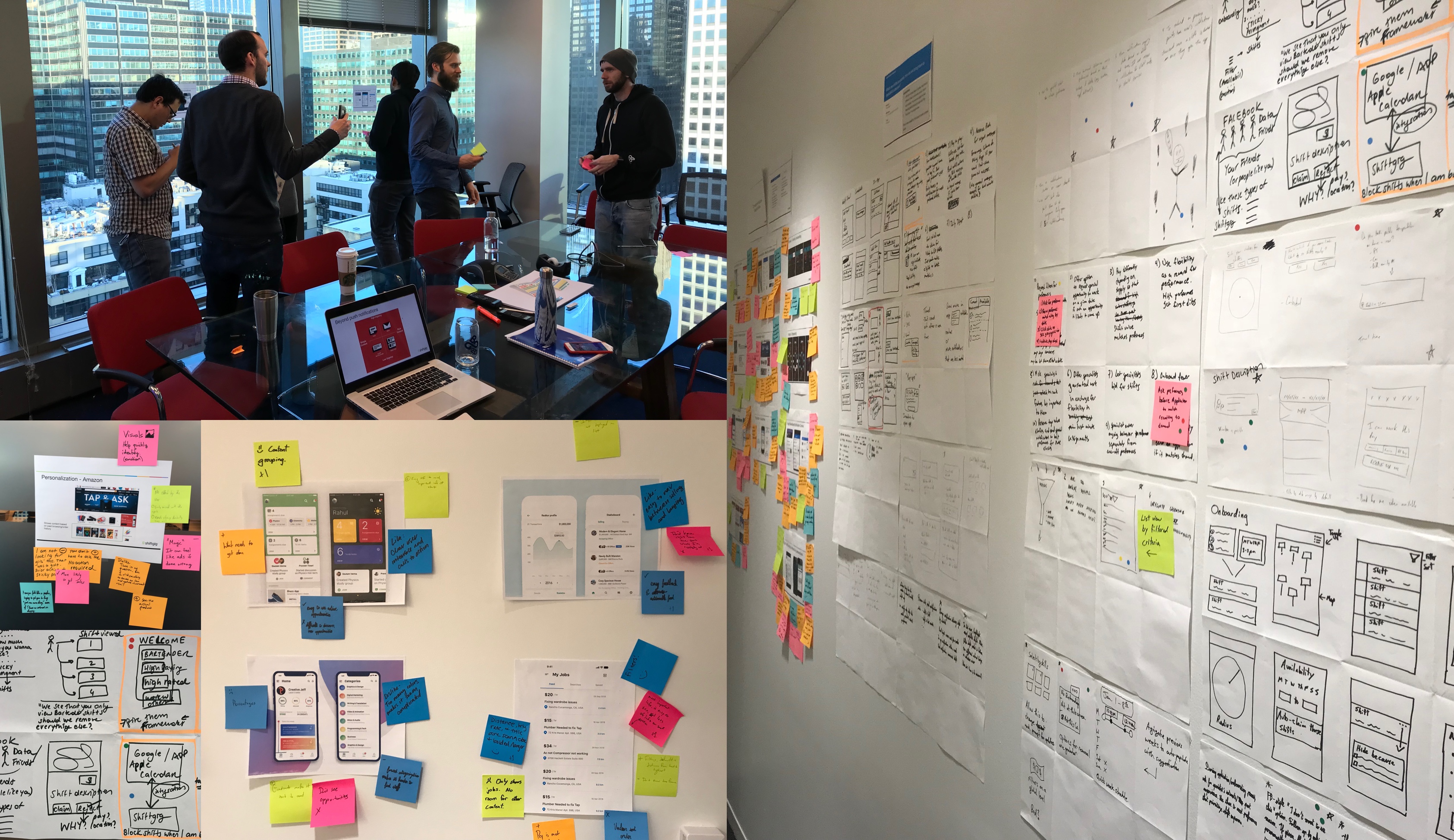 During the workshop, my squad settled on testing a home screen concept and flat architecture with in-app alerts concept. I then built out prototypes in Sketch to test with workers.

I brought in four worker users and conducted concept evaluations using the two prototypes I created during the exploration phase. I had the workers try to find and claim a shift that matched their preferences, view an upcoming shift, and clock into that shift. I also interviewed the specialists before and after the task exercises to learn about the users and solicit general feedback on the two concepts.

All of our tests and interviews were recorded and broadcast live on a private YouTube channel so anyone in the company could watch, take notes, or give feedback. 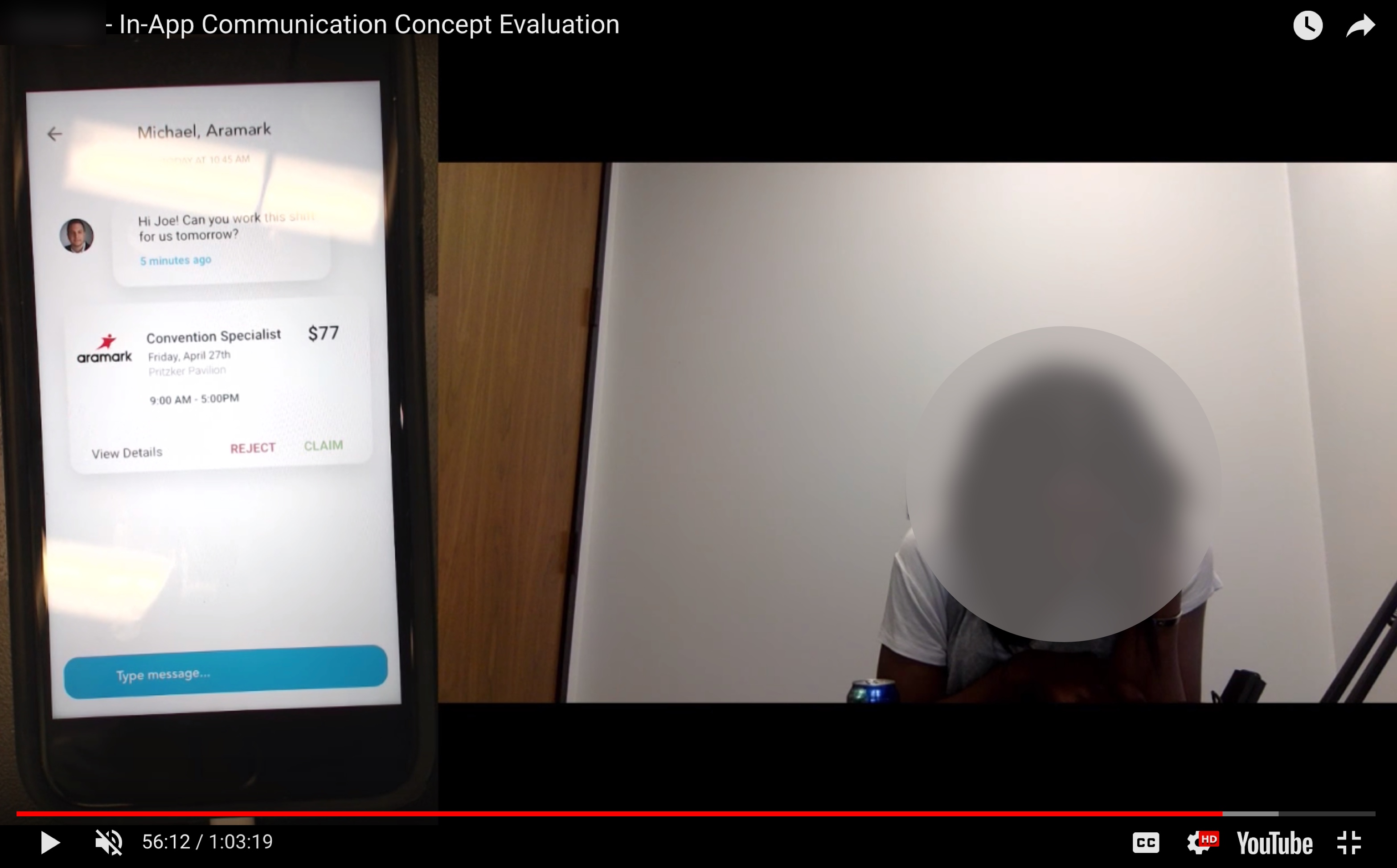 All testing and interviews recorded live and accessible to entire company on private YouTube channel.

Throughout the project our design team got together for weekly scheduled and multiple spontaneous design critiques. This allowed rapid iterations and tweaking during each phase of the design process.

I met regularly with product leadership, marketing and other stakeholders during the exploration and decide phases to ensure alignment. All screens were shared on Gallery.io for everyone in the company to view and provide feedback.

This was an exciting project to deliver because it introduced new app architecture to the worker mobile app for the first time in years. It also included new components and significant UI enhancements.

The home screen concept came out of early sketches and was fleshed out during the divergent design workshop. Instead of landing directly in the calendar, now when workers opened their app they would see personalized, relevant, and timely content so they would know immediately what needed their attention and what they should act on. 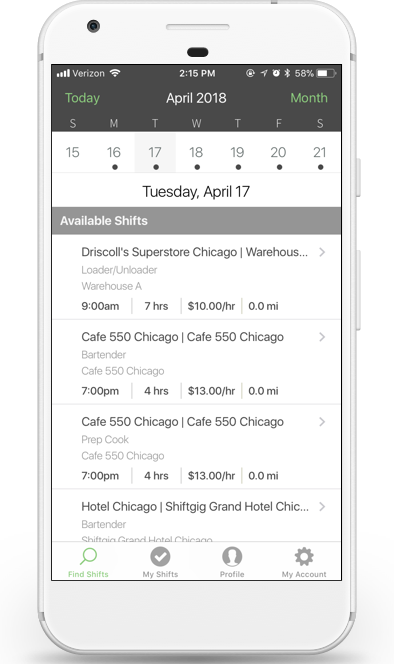 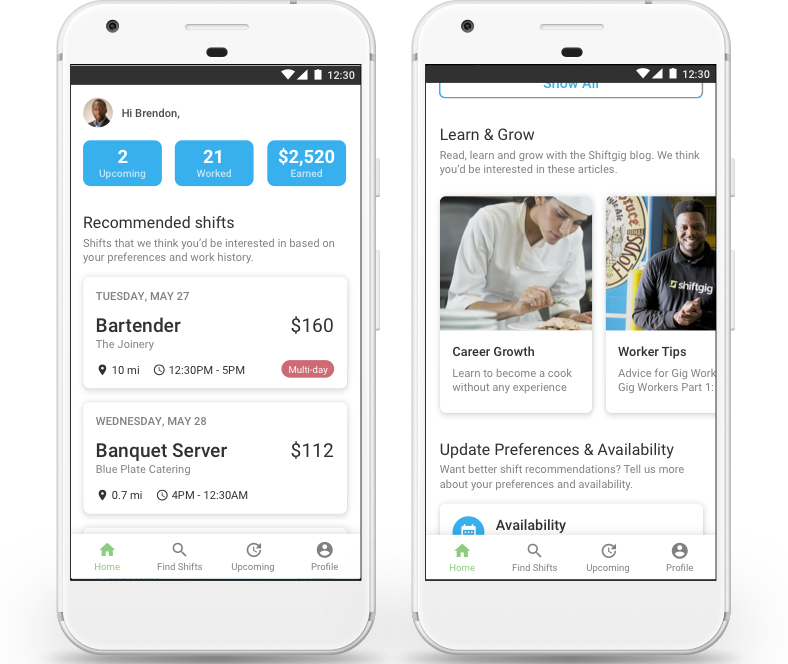 This was the most comprehensive use of AWS microservices yet at Shiftgig. The home screen was built as its own microservice that pulled in various content from other microservices. A big first step in dismantling our monolithic legacy architecture and rebuilding with small independent services to make our applications easier to scale and faster to develop. 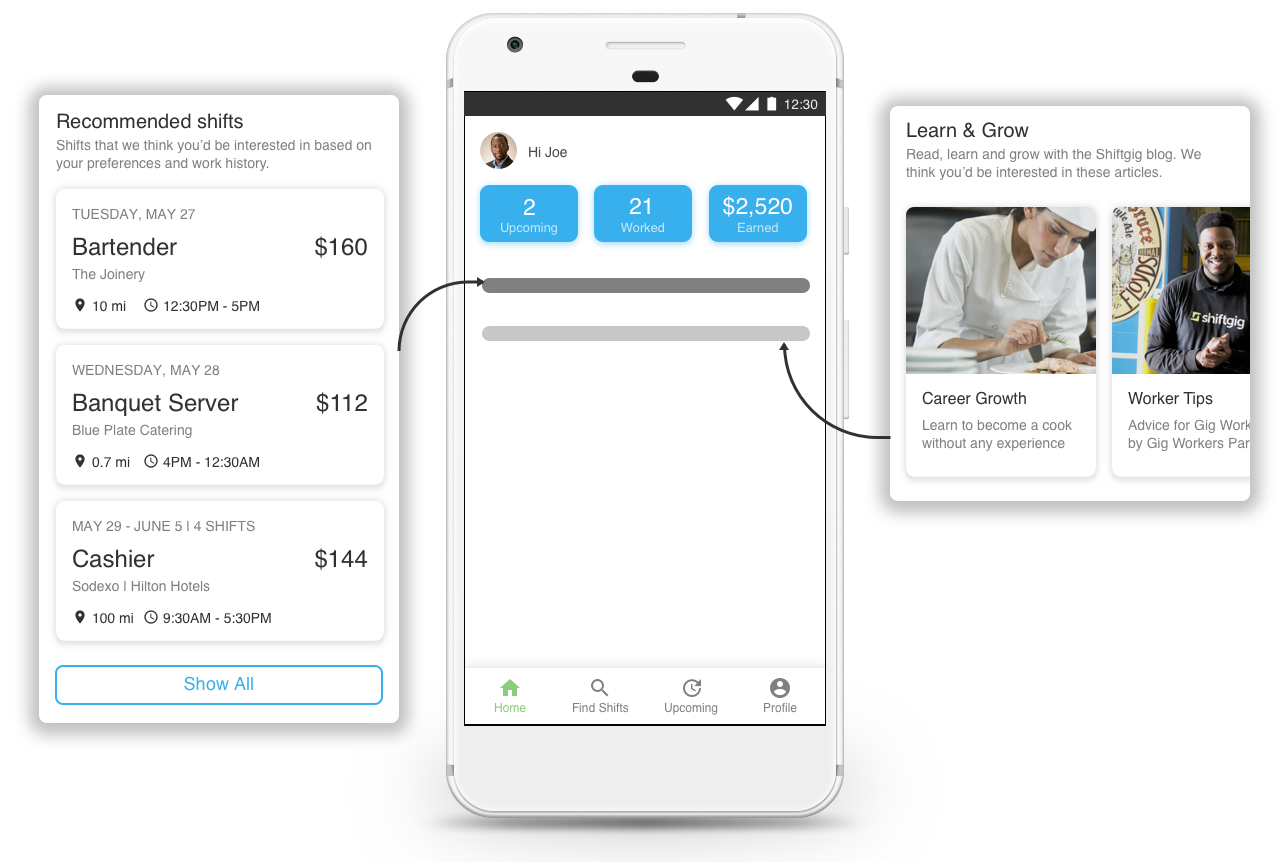 I introduced banner and toast components to help reduce our reliance on push, email and SMS channels to send information, especially for simple confirmations or alerts while the user is active in the app. 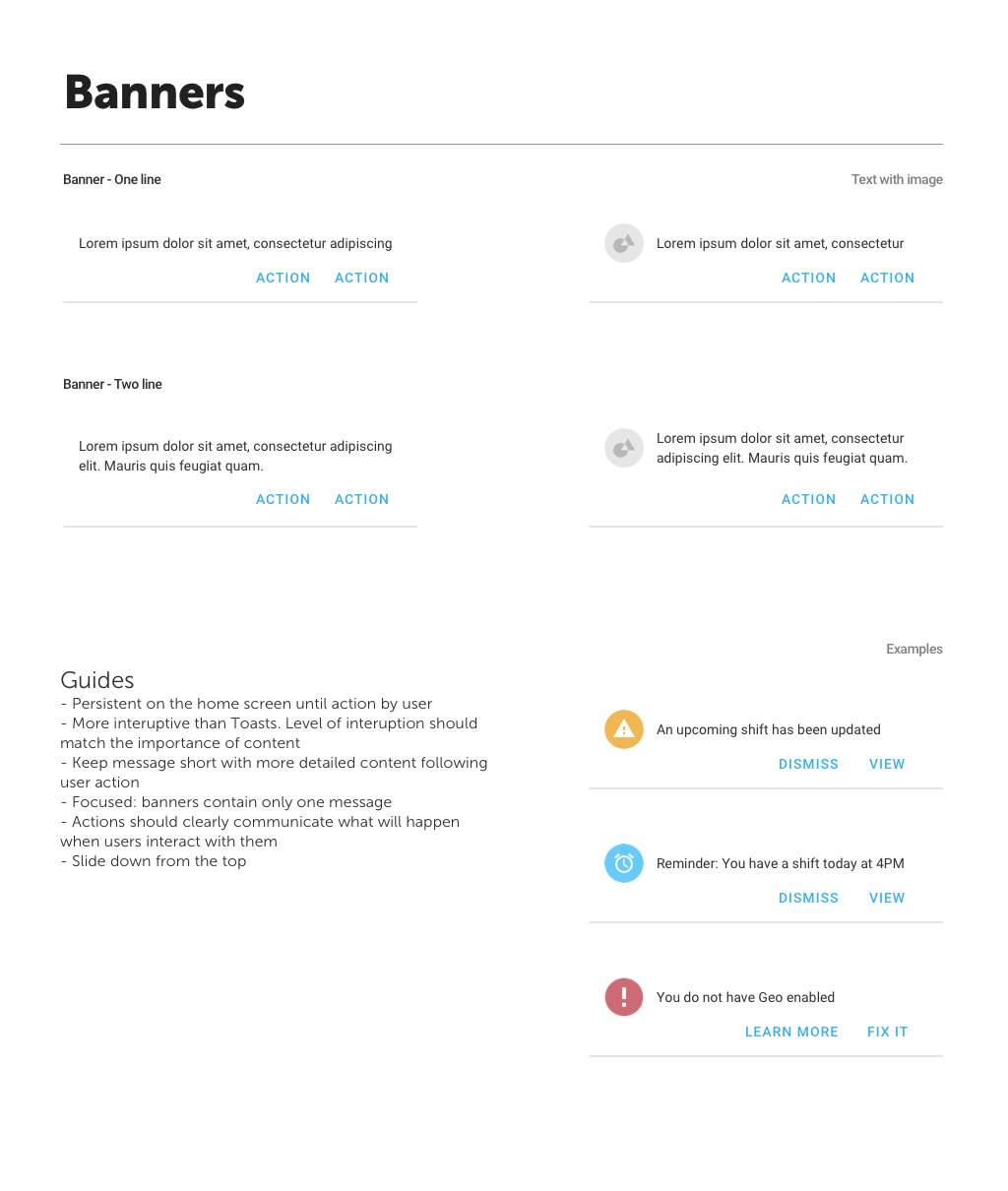 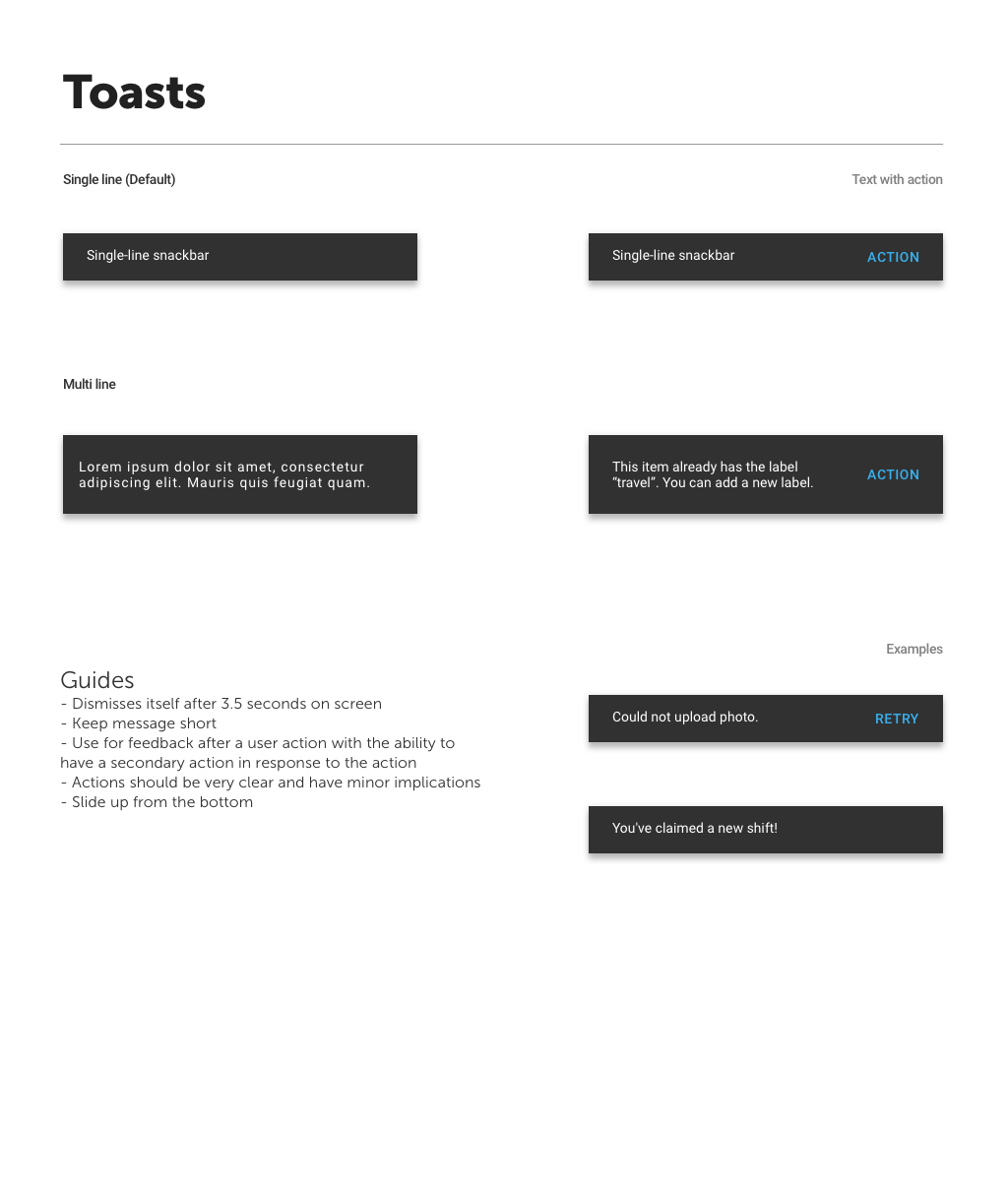 Working closely with my manager Joe Steinkamp, we used this project as an opportunity to completely redesign our shift cards and introduce tags to call out important shift level information. This redesign was informed by feedback we got during interviews and testing about the most important content to specialists when scanning though shifts. Redesigning the visual hierarchy made shift cards easier to scan for positions of interest.

Shortly following this project, I worked on redesigning how we communicate with workers at the system level. This project set guidelines on what channels to use for different types of content, a prioritization system, new specialist notification preferences settings, and incorporating analytics to make our messages smarter and more personalized.

We recently released the new worker home screen with shift recommendations. Early results have shown a 10% increase in the shift success rate. The comprehensive communication system redesign has finalized design work and is currently in development.